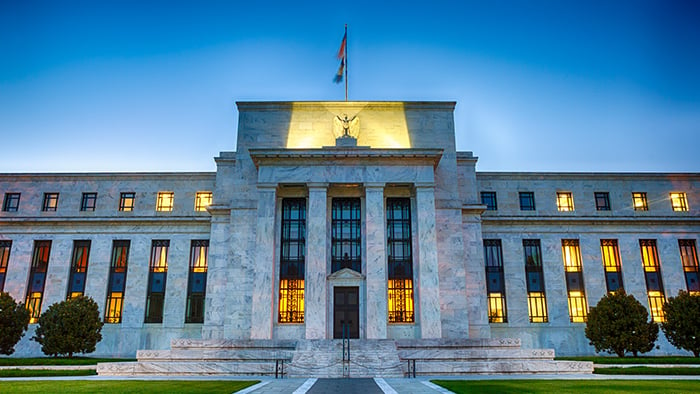 In October 2018, U.S. investors experienced a broad sell-off and an anxiety-fueled increase in market volatility. The recent stir in the financial markets has been blamed on a combination of factors: a worsening trade dispute with China, slowing global growth, a surge in Treasury yields, and possibly even an offhand comment by Federal Reserve Chairman Jerome Powell.1–2

U.S. gross domestic product accelerated to a 4.2% annual rate in the second quarter before cooling slightly to 3.5% in the third quarter. The unemployment rate fell to 3.7% in September, the lowest point since December 1969.3–4

Despite these signs that the U.S. economy is running on all cylinders, consumer prices remain largely in check. According to the core personal consumption expenditures price index, which excludes volatile food and energy prices, inflation hovered at the Fed’s 2.0% target rate for five straight months from May through September.5

The Federal Reserve now faces the tricky task of loosening monetary policy enough to control inflation and keep the economy from overheating, but not so quickly as to reverse economic progress or upset financial markets.

With the future health of the U.S. economy at stake, Wall Street will continue to pay close attention to the Fed’s deliberations, communications, and policy moves.

The Federal Reserve System is the central bank of the United States. The Federal Open Market Committee (FOMC) is responsible for setting monetary policies in accordance with the Fed’s dual mandate to foster maximum employment and price stability. The FOMC typically meets eight times a year to discuss the outlook for the U.S. economy and make policy decisions.

Seven members of the Board of Governors are appointed by the president and confirmed by the Senate to serve staggered 14-year terms intended to promote political independence. The Fed chair and vice-chair serve four-year terms and may be reappointed. President Trump selected Fed Governor Jerome Powell to succeed Janet Yellen as Federal Reserve chair in February 2018.

Fed governors monitor domestic and international economic and financial conditions, lead committees that study current issues, meet with government organizations, and may be called to testify before Congress. The seven governors make up the voting majority of the FOMC, with the other five votes coming from the president of the Federal Reserve Bank of New York and four other Reserve Bank presidents, on a rotating basis.

Adjusting the federal funds rate is one way the central bank influences interest rates, economic growth, and inflation. Theoretically, lowering rates fuels demand for credit and encourages consumers and businesses to spend and invest. Raising rates helps to slow economic activity when inflation is seen as the larger threat.

In September, the central bank raised the federal funds rate to a range between 2.0% and 2.25%, the highest level in a decade. The median projection of Fed officials is for one more quarter-point increase in 2018 and three next year, landing in a range from 3.0% to 3.25% by the end of 2019.6

Expectations for stronger growth and inflation have recently spurred a more pronounced increase in longer-term Treasury yields. The 10-year yield jumped from about 2.4% in January to about 3.2% just before the early October sell-off began.7

Following Treasuries, 30-year fixed mortgage rates are now approaching 5%, up from 3.95% toward the beginning of 2018. Higher rates are already affecting buyer affordability and having a negative impact on home sales.8

Fed Chairman Powell contributed to an overreaction in the markets with a comment that was interpreted by some as “hawkish” — that there could be more rate increases ahead than previously expected. In early October, Powell told a Washington audience that “we are a long way from neutral at this point, probably.”9

A neutral level for interest rates is one that neither spurs nor slows economic growth. Fed officials currently differ on their estimates of a neutral rate and whether they expect to raise rates to neutral or above, adding to investor uncertainty.10

When the Fed Speaks, Markets Listen

When interest rates go up, the value of existing bond investments typically falls, which can adversely affect performance. But bonds still have an important role to play in many investors’ portfolios — namely to help moderate the effects of stock market volatility and portfolio risk.

Equities may also be affected by rising rates, though not as directly as bonds. Widely expected Fed actions are often “priced into” markets before announcements are made, but surprises tend to have a more dramatic effect on prices.

The financial markets may continue to react — and possibly overreact — as the Fed assesses economic data and makes critical decisions. But that doesn’t mean you should do the same. It’s important to keep a long-term perspective and make sound investment decisions based on your time horizon, risk tolerance, and financial goals.

The return and principal value of stocks and bonds fluctuate with market conditions. Shares, when sold, and bonds redeemed prior to maturity may be worth more or less than their original cost. U.S. Treasuries are guaranteed by the U.S. government as to the timely payment of principal and interest.