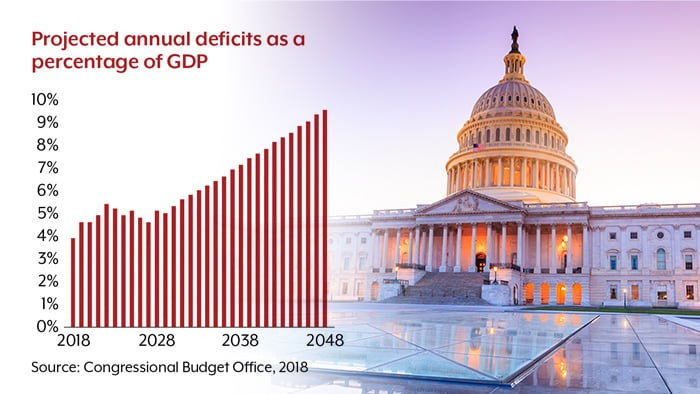 According to the most recent Congressional Budget Office (CBO) projection, the federal budget deficit for fiscal year 2018 (which ends on September 30) will reach $793 billion, or 3.9% of gross domestic product (GDP). This figure is $230 billion larger than the CBO previously estimated in June 2017, largely because legislation enacted since then reduced potential revenues and increased anticipated spending.1

The government runs a deficit when it spends more money over the year than it collects in tax revenue. To cover the difference, the government must borrow money from investors through the sale of Treasury bonds. Annual budget deficits add to the national debt, which already exceeds $21 trillion.2

With current policies in place, the budget shortfalls are not projected to end any time soon. In fact, the federal deficit is projected to widen substantially over the next several decades, reaching 9.5% of GDP by 2048.3

Here’s a closer look at the nation’s current fiscal situation and what it could mean for future economic growth.

The Tax Cuts and Jobs Act, which took effect in January 2018, included permanent rate reductions for corporations and temporary ones for individuals. The CBO projects that the tax law will stimulate economic activity and increase annual real GDP by 0.7%, on average, between 2018 and 2028.4

The Bipartisan Budget Act of 2018, passed by Congress in February, is a two-year budget deal that raises statutory spending caps that have been in place since 2011. It allows for $80 billion in additional spending for defense and $63 billion for domestic programs in 2018, and similar amounts for next year. The Consolidated Appropriations Act, a massive 2,232-page spending bill approved in March 2018, provides $1.3 trillion in government funding through fiscal year 2018.5

Despite slightly higher GDP growth, these three bills are expected to increase deficits by $2.7 trillion between 2018 and 2027, with $1.7 trillion from reduced revenues and $1.0 trillion from increased spending.6

While discretionary spending is controlled by Congress on an annual basis, mandatory spending (primarily for programs such as Social Security, Medicare, and Medicaid) is set automatically by formulas. Mandatory programs will account for about 38% of federal non-interest spending in 2018.7

Going forward, mandatory spending is projected to rise by an average of 6% per year, reaching $4.4 trillion by 2028. This trend is partly due to demographics, as a large population of baby boomers become eligible for benefits. In addition, health-care costs per Medicare and Medicaid beneficiary are likely to grow faster than the economy over the long term.8

Debt and the Economy

If the nation stays on its current path, debt held by the public will grow from roughly 78% of GDP in 2018 to 96% of GDP by 2028, according to CBO projections. This would be the highest level since 1946 and more than two times the average over the last 50 years.9

Rising debt combined with higher interest rates will increase the government’s annual interest costs, which would roughly double between 2018 and 2028 (when measured as a percentage of GDP).10

The CBO expects that a significant rise in federal spending will boost the U.S. economy in the short run, especially in 2018 and 2019. However, it is likely to lower real GDP in later years, when rising debt payments take a bigger bite out of tax revenues, resulting in even larger deficits.11

Increasing federal borrowing to cover large deficits could erode Treasury bond values.12 The Treasury is selling more bonds to finance higher debt at the same time the Federal Reserve is winding down its bond-buying program. To some degree, the expected increase in the supply of available Treasury bonds could be offset by an increase in demand if new Treasuries offer higher yields, but imbalances of supply and demand could spur some market volatility.

Another concern is that the economy and inflation could heat up too quickly, prompting the Federal Reserve to raise rates at a faster pace. And with debt mounting, lawmakers may have less flexibility to use fiscal policies to respond to future economic challenges.

The widening deficit also highlights some key challenges in balancing the federal budget. Tax breaks are often welcome, but they reduce revenue unless they generate large-scale economic growth. Many costly government programs are popular, essential, or both. Eventually, it could take some hard choices to reduce annual deficits and keep the national debt from rising to unsustainable levels.

U.S. Treasury securities are guaranteed by the federal government as to the timely payment of principal and interest. Bonds not held to maturity could be worth more or less than the original amount paid.