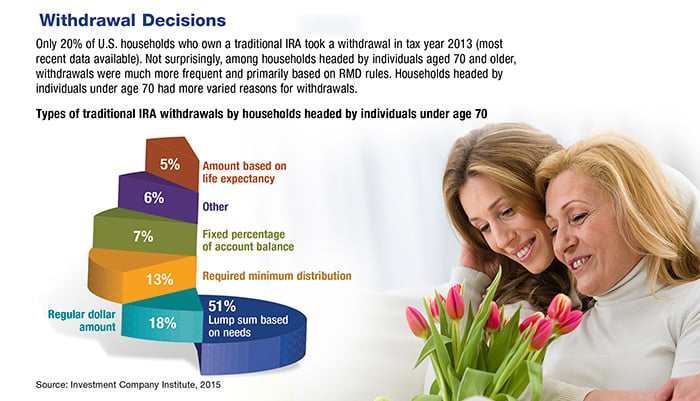 Although IRAs are primarily intended to help fund retirement, some people don’t withdraw all IRA assets during their lifetimes. Any remaining assets go to the account owner’s designated beneficiaries and could provide a generous legacy.

If you’ve inherited an IRA or might inherit one in the future, it’s important to understand your options. IRS rules and regulations for inheriting an IRA can be complex, and an uninformed decision could result in unexpected taxes and penalties.

To Stretch or Not to Stretch?
An individual who inherits an IRA can take all or part of the funds as a lump-sum distribution or stretch withdrawals over his or her life expectancy (under current law) by taking required minimum distributions (RMDs). If the original account owner was under 70½ at the time of death, the beneficiary can delay distributions until December 31 of the fifth year after the original owner’s death, but all the assets must be distributed by that time.

The lump-sum approach may be appropriate for small accounts, but you should think twice before liquidating a large account. Distributions from a traditional IRA are subject to ordinary income tax, so taking a large distribution could push you into a higher tax bracket and reduce the potential value of the inheritance. Roth IRA distributions might not be taxable (as long as the original owner met the Roth five-year holding requirement), but liquidating the account would lose the benefit of potential tax-free growth.

Taking RMDs
The rules on RMDs depend on the beneficiary’s relationship to the original owner. RMDs are generally based on the life expectancy of the beneficiary.

A nonspouse beneficiary who doesn’t cash out should properly retitle the account as an inherited IRA — such as “Joe Smith (deceased) for the benefit of Mary Smith (beneficiary).” Inherited IRAs are not subject to early-withdrawal penalties, but they are subject to annual RMDs, which must begin no later than December 31 of the year after the original owner’s death (regardless of the beneficiary’s age). However, if the original owner died after age 70½ and failed to take an RMD in the year of death, the beneficiary must take at least the amount of the RMD by December 31 of that year.

A surviving spouse who is the sole beneficiary has more options. The survivor can treat the assets as his or her own by rolling them over to an existing or a new IRA. RMDs would not have to start until age 70½ (distributions prior to age 59½ may be subject to a 10% early-withdrawal penalty). If the account remains an inherited IRA with the surviving spouse as sole beneficiary, minimum distributions are based on the beneficiary’s or the late spouse’s life expectancy (whichever is longer). If the late spouse died before reaching age 70½, distributions can be delayed until the year he or she would have turned 70½, but RMDs would be based on the surviving spouse’s life expectancy.

Another option that may be available to both spousal and nonspouse beneficiaries is to disclaim the IRA and allow it to pass directly to the account’s contingent beneficiaries. RMDs typically would be lower if based on the life expectancy of a younger beneficiary, which may result in a greater opportunity for the assets to pursue growth.

RMD rules become more complex when multiple beneficiaries are designated or when the IRA is left to the estate or a trust. Be sure to consult with a tax or estate professional before taking any specific action.