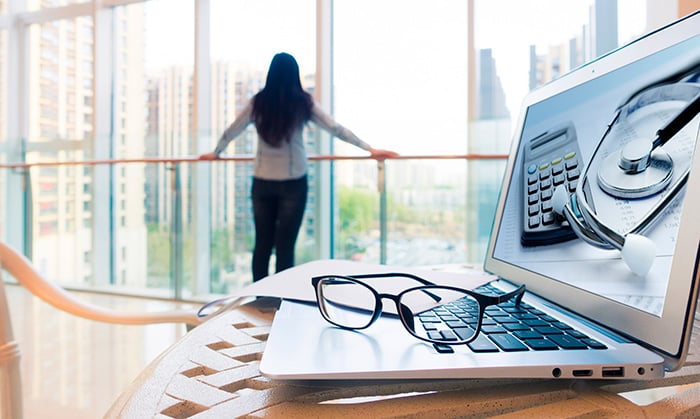 About 8% of U.S. household spending went toward health care in 2015, up from 5.8% in 2007. Even though the growth of nationwide health-care spending has slowed, the cost burden is falling more heavily on consumers.1

More than 118 million people qualify for coverage through government programs such as Medicare, which serves individuals age 65 and older and the disabled, or Medicaid, which provides care for the poor. Still, more than 55% of the U.S. population rely on health insurance provided by an employer.2

The health-care landscape has changed over the last decade, but some economists believe uncontained costs still pose a threat to broader economic growth. Here’s a closer look at recent trends, and why it’s more important than ever to be an informed health-care consumer.

Public Spending
Growth in U.S. health-care spending has outpaced total economic growth over the past five decades. In 2014, health-care expenditures accounted for about 17.5% of GDP, up from 5.6% in 1965.3 Though major advances in medical technology have contributed to spending growth, they have also led to better health and well-being overall.4

Public-sector spending has grown more quickly than private spending, largely due to an aging population, rising Medicare enrollment, and the expansion of Medicaid. The share of total spending by Medicare and Medicaid increased from 6.8% in 1966 to 36.8% in 2014.5

ACA Under Way
The Affordable Care Act created state-based exchanges where self-employed individuals, part-time workers, and others without access to group coverage can buy private health insurance. Consumers can compare plans online, and families with incomes up to 400% of the federal poverty level may be eligible for tax credits that reduce premiums. As income rises, subsidies decrease. In 2016, about 85% of the 12.7 million individuals who purchased coverage from the Health Insurance Marketplace received a subsidy.6

Since 2014, all citizens and legal residents have been required to have “minimum essential” health coverage or pay a penalty. The health insurance mandate was intended to add healthy individuals to the insurance pool and counterbalance a provision that prohibits insurers from excluding people with pre-existing conditions. As a result, the uninsured rate has decreased from 13.3% in 2013 to 9.1% in 2015.7

Workplace Plans
Employers have been paying around 80% of individual health insurance premiums, but plan changes, including higher deductibles and coinsurance rates, have shifted costs to workers who use health-care services.8

For example, the average deductible for individual coverage in an employer-provided health plan was $1,318 in 2015, up from $917 in 2010. A deductible is the amount the patient must pay before the insurance payments kick in. Health insurance deductibles grew 67% between 2010 and 2015, almost three times as fast as premiums and about seven times as fast as wages and inflation.9

If health insurance premiums continue to rise, it is conceivable that employers could pass more of the costs on to workers by raising premiums and coinsurance or limiting wage increases.

Accounting for Costs
It’s estimated that total U.S. health- care spending increased 5.5% to reach $3.2 trillion in 2015, and growth is projected to average 5.8% annually through 2025. Cost increases have moderated after averaging nearly 8% annually over the previous two decades, but they are still increasing much more than overall inflation.10 Prescription drug prices have been rising at a faster pace. According to one drug-benefits manager, the average price of brand-name drugs rose 16.2% in 2015, surging 98.2% since 2011.11

The research and development of breakthrough medical technologies is undoubtedly a valuable endeavor. Even so, experts say newer and more expensive treatments are not always more effective than existing lower-cost options. It has also been suggested that the fee-for-service payment model — in which insurers reimburse providers based on the number and type of treatments — may drive inefficiency and unnecessary spending by rewarding the quantity rather than the quality of care.12

Economic Impact
Even with insurance coverage, an illness or injury can cause financial pain for a middle-class family with limited disposable income. The prospect of medical bills may cause some families to skip or postpone necessary care, and those who do seek treatment have less money available to spend on other basic needs. A Brookings Institution analysis found that middle-income household spending on health care increased nearly 25% between 2007 and 2014, while spending on restaurant meals and clothing dropped significantly (–13.4% and –18.8%, respectively).13

Health spending across the economy is expected to accelerate and reach 20% of GDP by 2025, which could put additional strain on consumers, employers, and the federal budget.14

Open Enrollment
This is the time of year when employers introduce changes to their benefit offerings, so choosing — and then using — your health plan carefully could help you save money. Before you sign up for a specific plan, consider the extent to which your prescription drugs are covered, estimate your potential out-of-pocket costs based on last year’s usage, and check to see whether your doctors are in the insurer’s network.